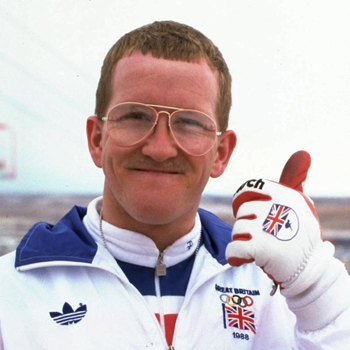 Eddie ˜The Eagle‘ Edwards is Great Britain‘s first Olympic Ski Jumper.  He was ranked 55th in the world which qualified him as the only GB applicant for the 1988 Winter Olympics in Calgary.
With the UK firmly backing the plasterer from Gloucestershire, Eddie took to the slopes followed by a whirlwind of international press and media.
Eddie competed in the 70m and 90m ski jumping events but unfortunately came last in both events.
With his ginger hair, trademark moustache and milk-bottle specs - which steamed up on the ski-jump, Eddie soon gained the name "Mr Magoo of the Slopes" back home, but he also captured the imagination of a British public who had hardly expected that one of their countrymen would make an impression on the ski slopes, even less at the Olympics!
The press lampooned Eddie as an embarrassment, but at the closing ceremony, the President of the Games singled Eddie out for his contribution saying  At these Games, some competitors have won gold, some have broken records, and some of you have even soared like an eagle". It was the first time in the history of the Olympic Games that an individual athlete had been mentioned in the closing speech, even if it was because of his distinct lack of success!
Eddie is perhaps the best example of a heroic failure, whose perseverance and achievement was - it should be stated - gained without any funding. For that, and for many other reasons, Eddie is more hero than failure, and his story continues to win over audiences.
"Eddie was fantastic.....  From the moment you suggested him to the end of conference yesterday it has been nothing but plain sailing, we particularly appreciate his willingness to give up his time and participate in pre event media.  His story is wonderful and was perfect for this event."
"The event was a huge success! Eddie was amazing and we couldn‘t have asked for a better VIP guest, thank you, thank you."
"Just wanted to say a huge thank you to Eddie!  What an absolutely lovely guy.  He was brilliant with everyone and really made the day very special.  I hope he enjoyed it as much as everyone else did here.  We would love to have him back ."   Prime Performers
Eddie joined our industry panel Where are we Now?  On Tuesday 15 December 2020- click here to watch the session.
Read More