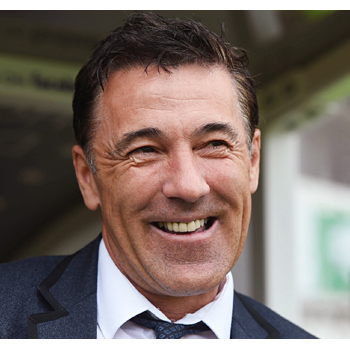 Dean Saunders is a former player with a wealth of stories about his vast career which has taken him too many places.

Dean played in over 700 games and scored 254 goals, capped by Wales on 75 occasions, scoring 22 goals for his country.

After retiring from football in 2001 he became a coach and then moved on to Newcastle United in 2004 initially as striker’s coach, and then first team coach under old boss Graeme Souness. He left Newcastle in 2006 and took his coaching badges and was appointed assistant manager of Wales in June 2007.

He was one of the Welsh national side’s most prolific scorers. Made his debut as a 21-year-old against Ireland in 1986, no Welsh fan will ever forget his goal which secured a famous 1-0 win over Brazil in Cardiff in 1991. He won the last of his caps against Ukraine in 2001 just a few months short of his 37th birthday.

"Dean Saunders was the perfect guest speaker for our dinner last night. He made himself available from 6pm to gone midnight, chatted freely with the guests, signed autographs, posed for photos etc. and toned his language down to suit the crowd - all without any fuss at all."  Duchy Football League

"Dean was absolutely brilliant, so much so that the comedian had a hell of a job to follow, the standing ovation that Dean received said it all."