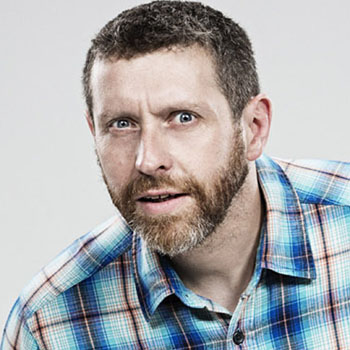 Dave started performing stand-up in 1990. In 1995 he hosted The Comedy Zone at the Edinburgh festival and returned to the festival with solo shows for five consecutive sell-out years.

In 1998 he started the move away from stand-up with his first themed show: Reasons To Be Cheerful - a 90 minute stage show about a four minute pop song. This was the first show in the genre that has since been dubbed documentary comedy.
He continues to explore this genre; taking a different theme for each show and sticking to it,  presenting the documentary evidence to back up the true life adventure as it unfolds on stage.
In 1999 he created Better World and in 2000, Are You Dave Gorman?
While he tours extensively in the UK, he has also performed at all the major international comedy festivals: Melbourne, Aspen, Montreal and Edinburgh as well as touring New Zealand and Norway and mounting a three month run off-Broadway, New York.
He appeared in an episode of Absolutely Fabulous and had a small role in the film '24 Hour Party People', about the Manchester music scene.
He co-wrote the first three series of The Mrs Merton Show along with Caroline Aherne, Craig Cash and Henry Normal.  The show transferred from BBC1 to BBC2 and won BAFTAs for two years running -  In 1996 - Best Entertainment Series and in 1997 - Best Chat Show .
Dave has also written for Steve Coogan and The Fast Show as well as contributing to Simon Munnery's Sony Award winning Alan Parker's 59 Minutes of Truth (Radio 1). With Danny Wallace he co-wrote and co-produced The Dave Gorman Collection and Dave Gorman's Important Astrology Experiment for BBC2.
Read More