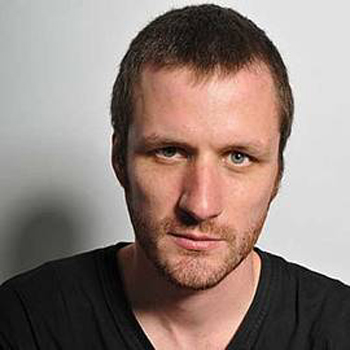 Observational comedian, writer and presenter Danny Ward's humour is up-beat and well honed, and his manic style of delivery is both endearing and very funny.  With a high energy set and brilliantly well observed material covering everything from the randomness of the Lidl,  to how to get the 'London Look'  the gags keep coming.   Danny has been booked throughout the UK by all the major comedy clubs and has also completed two tours performing to returning troops.
His hit Edinburgh Festival shows - Pressure Point in 2013 and Infra Dig in 2014 - where he regaled his audiences with tales of living, and escaping from, his Auntie Annie's conservatory, won him rave reviews.
Danny was the winner of the 2013 Amused Moose People's Choice Award for Best Show at the Edinburgh Fringe and was a Nominee for the Leicester Mercury Comedian of the Year 2013
'Delightfully clever punchlines¦ He endears himself with an engaging if unusual style of language. Wordy but accessibly so, he throws in sneaky puns and well-hidden one-liners that reward the attentive listener without alienating anyone that missed them. It's clever stuff.' - Chortle
Read More