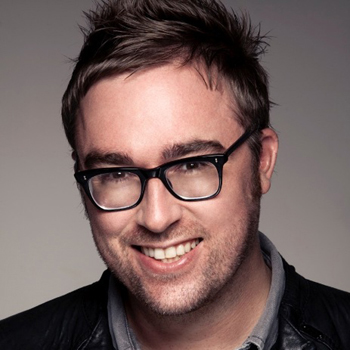 He’s a multi-award-winning television and radio presenter, an internationally-bestselling author of 17 books, a BAFTA-winning voiceover artist, and Jim Carrey played him in a film.

As a TV presenter, he’s hosted live Saturday night shows on BBC1 like Test the Nation, School’s Out and Castaway, written and presented BBC2 documentaries like How to Start Your Own Country and Horizon, helmed major behind-the-scenes events for ITV, and investigated conspiracy theories and hosted live music events for Sky.

He’s presented fact-ent documentaries on science, technology, comedy, monkeys (!) and more on BBC2, SkyOne, Radio 4, Radio 1 and more. He has for four years been Lead Commentator for his favourite childhood show, World’s Strongest Man, for Channel 5.

His books include Sunday Times-bestsellers Join Me, Awkward Situations for Men and Yes Man (made into the Jim Carrey comedy which grossed more than $290 million worldwide) as well as the multi-award-winning children’s series, Hamish and the WorldStoppers.

His more-than 25-year writing career includes work for TIME, the Guardian, the Times and dozens more. He is Contributing Editor at British GQ in features, and his award-winning weekly column in ShortList magazine reaches 1.4 million readers weekly and has been going 11 years.

In the US, he wrote and starred in his own sitcom pilot for ABC, and has written for Warner Bros, 20th Century Fox, Universal, Sony Animation, and Ivan Reitman’s GhostCorp. He was recently picked by the creators of The Daily Show as host of a brand new topical format in development for the US.

His voice acting work includes six games in the multi-million-selling Assassin’s Creed franchise, and Thomas Was Alone, for which he won a BAFTA for acting. He was also nominated for a Writer’s Guild of America Award for his writing on the former.

As a producer at the BBC, his work includes The Boosh (Radio 4) and Ross Noble Goes Global (Radio 4). More recently he was Artist in Residence at BBC Comedy.

As a live host, he has written and guided the BAFTA Games Awards, the BBC Film Festival, the Virgin Film Awards, and is the regular host of the Golden Joysticks, as well as many others.

His novel 'Charlotte Street', which hit the best-seller lists in its first week, has been snapped up by the film producers behind Four Weddings and a Funeral.
Read More