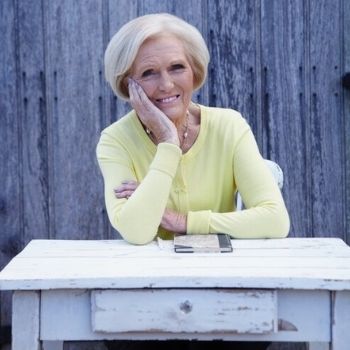 Dame Mary Berry trained at The Cordon Bleu in Paris and Bath School of Home Economics. In the swinging '60s she was cookery editor of Housewife magazine and later for Ideal Home magazine.
Her first television series Afternoon Plus with Judith Chalmers came out in the early 1970s and was a big hit with British mothers. Having had three children, Mary continued her career through the 80s writing books and filming for BBC television from her home in Buckinghamshire.
In the early 1990s Mary launched her Aga Workshops, a cookery school at home, with over twelve thousand visitors over sixteen years. In the mid 1990s Mary's daughter Annabel launched Mary Berry's Salad Dressing.
Since the millenium Mary has continued to do demonstrations, write books and do media work. Most noteably she is a judge on The Great British Bake Off, The Junior Bake Off, Comic Relief Bake Off and Sports Relief Bake Off which has taken the country by storm.
Mary often appears as a guest on television and radio, including The One Show, Food and Drink Programme, Graham Norton Show, Loose Women, Alan Titchmarsh Show, BBC Breakfast, Chris Evans Breakfast Show, Womans Hour.
Mary continues to write books with Lucy Young, who has been her assistant for thirty years.

She was awarded a Damehood in the 2020 Birthday honours list for services to broadcasting, the culinary arts and charity work