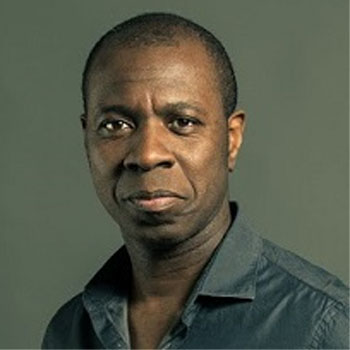 Clive Myrie is a multi award winning journalist, one of the BBC's most experienced foreign correspondents and a recognized face as a BBC News presenter.

He studied law at the University of Sussex then gained a place on the BBC's prestigious journalism trainee scheme in 1988, starting in local radio and progressing through the ranks from regional television to network TV and radio reporting in 1992.

He regularly presents on the BBC News Channel and the 1pm and 10pm news bulletins on BBC1.

Clive continues to make features and programmes for Panorama, Newsnight and Radio 4. He is a regular BBC anchor on location as history defining stories break, such as the terrorist attacks in Sri Lanka and New Zealand, Prime Minister Theresa May's resignation, President Trump's state visit to London, and the all-English Champions League 2019 final in Madrid between Liverpool and Tottenham Hotspur.

His work in 2018 covering Mexico’s drug cartels received universal acclaim and was nominated for no less than eight international awards. He is the winner of the broadcast equivalent of the Pulitzer prize- the Peabody Award, and holds two Honorary degrees.

Clive became a full time foreign correspondent in 1996, first being posted to Japan. Since then he has held some of the most important posts in foreign newsgathering including Washington Correspondent, Europe Correspondent, Asia Correspondent and Africa Correspondent. Clive has reported from more than 80 countries on some of the most important news events over the last 20 years including the wars in Croatia, Kosovo, Afghanistan and Iraq. In 2002 during the Iraq War he was "embedded" with Royal Marines from 40 Commando part of British Armed forces. In 1996 he covered the rise of the Taliban and their conquest of Afghanistan and after the September 11 attacks, covered their downfall.

Clive has a particular interest in US politics covering the administrations of three Presidents (Clinton, Bush and Obama,) and reported on numerous Congressional mid term elections and two Presidential races. In 2010 he anchored the BBCs coverage of the mid term congressional polls.

He has won awards in Monte Carlo, citations in the United States (from the EMMY committee) and the UK (a Screen Nations award.) . He has also been twice nominated for France's prestigious Bayeaux War Correspondent award and was part of the BBC team nominated for a BAFTA for coverage of the devastating floods in Mozambique in 2000.

As well as presenting the One, Six and Ten 0’Clock News bulletins on BBC One, and hosting news shows on the BBC News Channel, Clive continues to travel the world as a reporter, and makes features and programmes for Panorama, Newsnight and Radio 4.  He has also led much of the BBC’s Black Lives Matter coverage.

In 2021 he takes over as Host of BBC's famous show "Mastermind". He has also won two awards already this year!

Clive's huge experience mixed with his warm charm, make him an ideal host and a safe pair of hands at any event.

Clive chaired our Virtual Diversity Panel on 6th August - check it out below!