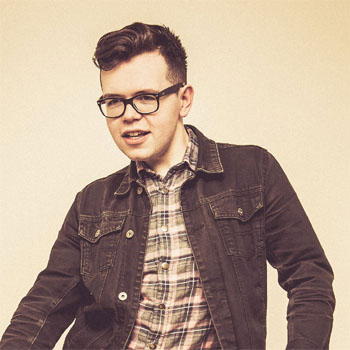 Born and bred in Glasgow, Christopher Macarthur-Boyd is a rising star of Scottish stand-up.

Fast becoming a Fringe festival favourite, Christopher’s debut hour Home Sweet Home was officially the best reviewed of any Scottish stand-up at the Edinburgh Fringe: ‘A debut hour that seems endlessly enjoyable’ (The Skinny). 2019 saw Christopher returning with a sell-out run of Dreamboat: ‘This diminutive Glasgow comedian has the ability to not only find the funny, but to exploit it to the max’ (One4Review). Christopher has followed this up by winning Best Breakthrough Act at the 2019 Scottish Comedy Awards and being listed the 59th funniest person in Scottish history, on a list of 60.

Christopher co-stars in BBC Scotland’s Up For It, with the second series airing in the spring 2020. Other TV credits include hosting BBC Scotland’s The Comedy Underground. Christopher has also made appearances on BBC Scotland’s Breaking The News, BBC Radio 4 Extra’s Stands Up At The Fringe. and BBC Radio 4’s Fred at The Stand, and Evil Genius with Russell Kane.

Christopher Macarthur-Boyd is also a writer, with pieces appearing in The Skinny, The National and Glasgow Times. In 2019 he made his debut as an author when his first short story was published by Speculative Books.