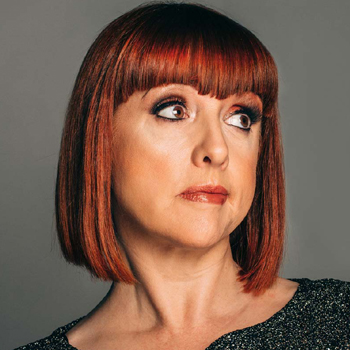 Cally is an experienced comedian, MC and after-dinner speaker in the corporate world. As well as being a successful stand-up, Cally has worked in the media industry for over 25 years (under her birth name Caroline Beaton).

She has operated at senior management level in companies including ITV, MTV and Comedy Central and founded Road Trip Media in 2004. She is a BAFTA voting member and holds a seat on the Development Board of MTV’s Staying Alive Foundation.

She is a Master Practitioner in Neuro Linguistic Programming and offers coaching and workshops virtually.

Cally has produced and hosted many prestigious international events, including regular bookings in London, New York and Cannes. She is a sought-after comedian, public speaker and panellist and a highly-skilled and experienced presenter. Cally also works as a mentor and champion of gender equality across a range of industries. Her clients include: Bloomberg, Kudos, PWC, IMG, Endemol, Channel 4, All3, Sky Television, L’Oreal, Wella, and Disneyland.

Cally can also be seen on shows such as QI and The Blame Game.

Currently Cally is offering inspiring a discussion based workshop to clients for groups of up to 25 people. These are done on a Zoom based platform and titled "Negotiating With Your Lockdown Demons"

Cally facilitates a constructive discussion about your personal response to lockdown, and its impact on you and those around you. The focus of the workshop will be on the honest and open sharing of experiences, drawing out meaningful takeaways that will help ensure the session resonates meaningfully after the event, as well as making you feel good on the day!

“Cally Beaton is an exciting and hilarious talent, definitely one to watch. Sometimes you just know when someone’s got it – and she’s got it”
Time Out

“Not even a bit funny. She’s just embarrassing.”
Daughter