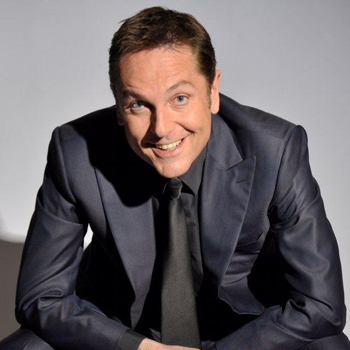 Brian Conley is one of the UK's most versatile and popular performers. He has become a household name thanks to such diverse characters as Dangerous Brian, Nick Frisby "It's a puppet", Doug Digby and the legendary Al Jolson.

He was born and raised in West London and studied Performing Arts at The Barbara Speake Stage School and then at the age of 16 hit the road and made a living performing cabaret in nightclubs.

He began his TV career as a warm up man for Terry Wogan, Noel Edmonds and Kenny Everett, but soon started appearing in front of the cameras with regular appearances in Five Alive and Live from the Palladium. He was soon snapped up by ITV and given his own starring vehicle to demonstrate his unique and versatile talents, this was Brian Conley - This Way Up which was followed by The Brian Conley Show.

He was then offered the lead roll in Time after Time which was awarded The British Comedy Award for Best ITV Sitcom. He then went on to play the hugely popular Doug 'Dynamo' Digby, starring opposite Amanda Holden and Noddy Holder in The Grimleys, presented The National Lottery Show Live, provided all the voices for the children's computer animated series Busy Buses, hosted his own chat show for ITV, starred in An Audience With.... as well fitting in numerous Royal Variety Performances, the highlight of which was hosting the last Royal of the 20th Century. He was especially proud to be asked by Bob Hope to be the special guest star on Bob's last world tour.

He is also gaining a reputation as a fine actor. He starred in Circus with John Hannah and Eddie Izzard, Unconditional Love alongside Kathy Bates, Dream with Sinead Cusack, Arthur's Dyke with Pauline Quirk and joined Sean Bean and Christian Bale in the cult film Equilibrium.

On stage in the West End Brian spent a year starring in Me And My Girl at the Adelphi Theatre. At the Victoria Palace he originated the title role, in the Olivier award winning Jolson, which opened to rave reviews. The Mail on Sunday said it was "the performance of the decade" and the Daily Express commented "it takes a star to play a star". He also had a successful run in the play Elton John's Glasses at the Queens Theatre, Shaftesbury Avenue. Recently he starred as Caracticus Potts in the West End musical Chitty Chitty Bang! Bang! In 2006 he recreated the role in Manchester and Birmingham on the National Tour of Chitty.

Over the years Brian has also had success with his first love, singing. He has recorded three albums "Stage to Stage" with the London Philharmonic Orchestra, "Let The Good Times Roll" and "Brian Conley Sings".

Brian has won numerous awards in his career including The National Television Award for Most Popular Comedy Performer, Show Business Personality of the Year and in the 2004 Manchester Evening News Theatre Awards Most Popular Performer. He has also received TV's top accolade when Michael Aspel presented him with the Big Red Book on This is Your Life and was honoured to be asked to address the Oxford Union.