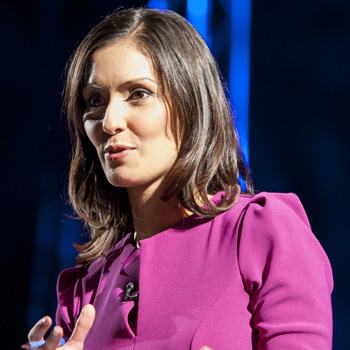 Babita has just published her debut book, The Corner Shop a charming account of the shopkeepers and indeed Sharmas, who made modern Britain. It is full of the life and characters which make up the richness and diversity of the local community and encapsulates a crucial part of the last 50 years of British history.

TV Presenter and News Anchor for the BBC, Babita Sharma has fronted documentaries and programmes and was named as one of the BBC’s ‘Talents to Watch’ for 2017/2018.  Her documentary Booze, Beans & Bhajis was broadcast on BBC Four, BBC News Channel and BBC World News in March 2017 to critical acclaim.

Babita co-presented BBC One’s Supermarket Shopping Secrets and fronts a BBC Two series Dangerous Borders: The Story of India & Pakistan, which sees her trekking the India/Pakistan border 70 years after partition. It is also a personal story for Babita whose family was directly affected during the partition of India.

Babita is a regular guest presenter on BBC World Service for Outlook, The Fifth Floor and The Conversation and is also a guest contributor for Biz Matters. She also works on overseas projects for BBC Media Action and has recently travelled to Myanmar & Cambodia.

Passionate about diversity and mental health issues, Babita is part of the senior diversity programme at the BBC and mentors journalists from a BAME background. Babita also works with the charity Mind where she has helped develop a training programme for students about mental health awareness for children.

"I wanted to write and say a massive thank you to you for an absolutely tremendous job last week. The clients are over the moon and everyone loved working with you - without exception everyone has raved about you!  On a personal note thanks so much for the long hours, patience and your good humour even when the demo threw challenges at you, you were calm and collected!"  Project Director/Producer for Orange Business Live