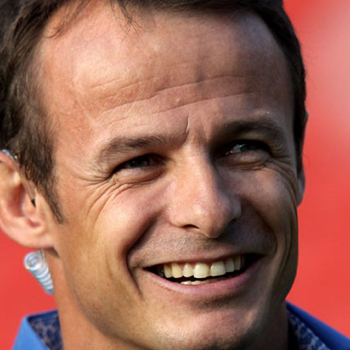 HEADLINE: Austin's wife, Lou, is running, swimming and kayaking along the length of the Great Wall of China for the British Lung Foundation. Do support her if you can.

Austin wowed audiences with his dance moves on 'Strictly Come Dancing' in 2008, having had a successful rugby career.

With over 50 international caps and over 200 appearances for Leicester, Austin Healey is hailed as the player who created the break that ended in the winning score in the Heineken Cup Final 2001 in Paris; he then scored the second and decisive try against Munster when Tigers retained the cup the following year.

After more than 10 seasons with the club, Healey played in virtually every position behind the scrum, and tasted success in domestic as well as European competitions being in the squad that won four consecutive Premiership titles and was voted both Leicester Tigers' and Allied Dunbar's Player of the Season in the 1999/2000 season.

Educated at St Anselm's College, Birkenhead and at Leeds Metropolitan University, Austin represented England at U21 and A level, as well as England Sevens whilst playing for Orrell.

After moving to Leicester he made his senior England debut in Ireland in 1997 and was subsequently chosen for the British Lions tour to South Africa later that year where he played in seven matches including the last two tests. He has now represented England in 5 Five/Six Nations tournaments ('98-'02) and was a key figure in the 1999 World Cup. He was selected for his second British Lions tours, to Australia in 2001, but unfortunately missed out on further caps due to injury. He was also very unlucky to miss the final cut when the 30-man England squad for the 2003 World Cup was announced.

A non-travelling reserve, he made the trip 'Down Under' mid-tournament as cover at scrum-half, but returned to his club when he was not called on to play.

Austin is a popular, if controversial figure off the pitch, regularly contributing to the media. He is a popular choice on the corporate circuit, both speaking at events and is renowned as bit of a bandit on the golf course!