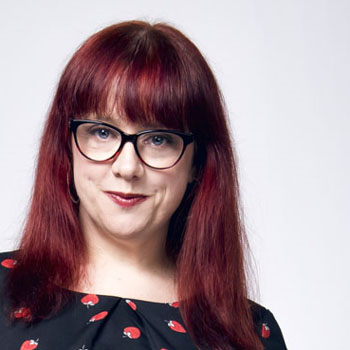 BBC New Comedy Awards winner in 2011, Angela Barnes is a self-confessed massive BBC Radio 4 nerd, in particular a devotee of the News Quiz of which Linda Smith is her comedy hero.
Angela started her comedy life running the well-loved boutique Brighton comedy night The Funny Farm in 2009. Just 19 months later she won the coveted BBC New Comedy Award.
She is a regular on the stand-up circuit and also appeared on Mock the Week and Live at the Apollo played on Eddie Izzard's Laughs in the Park on BBC2, appeared on Russell Howard's Good News on BBC3. On radio, she has written for and appeared on Radio 4's The News Quiz, has developed her own series with BBC Radio Comedy, and performed at the Latitude Festival, the Edinburgh Festival Fringe and Radio 2 Live in Hyde Park.
This is a lady who is confident in the way she attacks her one liners and punch lines, her easy going manner really drew the audience in   Fringe Review
Hers is a world-weary and devestatingly matter-of-fact outlook on the world that really makes her stand out   The Guardian
Read More