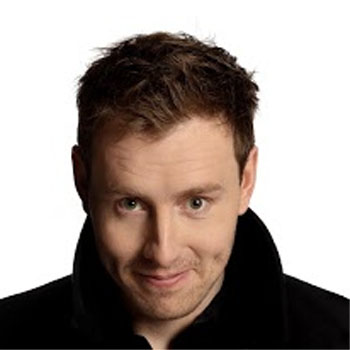 Irishman Andrew Ryan is one of the most exciting talents in recent years; in demand as an act and an MC at the biggest comedy clubs across the UK & Ireland.

Andrew has appeared on many TV shows in the UK & Ireland He has performed stand-up on BBC3’s Russell Howard’s Good News, Best of the Edinburgh Festival Live on BBC3, The Blame Game on BBC 1, Live at The Comedy Store for Comedy Central, Live for MIND on Comedy Central, The Six O Clock show on TV3 ( Ireland). Contributions to Golf’s Funniest Moments, Crickets Funniest Moments, When Chat Shows Go Wrong all for Sky 1.

In Ireland Andrew performs regularly in Dublin and has been invited to  perform at Kilkenny Cat laughs festival, Ivy Gardens in Dublin, Galway & Cork Comedy Festival.

Andrew can also perform "virtually" at your event:

Defeat the nerves...
Do you have to deliver presentations, motivational speeches, or deliver results to an audience? Do you find the prospect of speaking in front of people daunting? Comedian Andrew Ryan battled his nerves to move from being a Bank Manager to Comedian and can share his expertise, skills  & tips on how to speak in public.  Andrew is here to offer you a funny and informative seminar on effective measures to handle your nerves, adrenaline and also how to perform in a relaxed way to get the best out of your performance.

In 2017 he brought his show ‘Did you get here alright?’ to Edinburgh and is now taking it across the Uk on tour  (Rapturously Funny ★★★★- The List) In 2018 he won ‘BEST NEW SHOW’ at The Leicester Comedy Festival with his new show ‘ Is everything alright at home?’

"He was great, thanks. I really enjoyed it and judging from the laughter from around the room so did the others. He was cautious and daring at the same time which I liked. He's a really likeable chap and I wish him well in his career."  International Powered Access Federation Conference
Read More