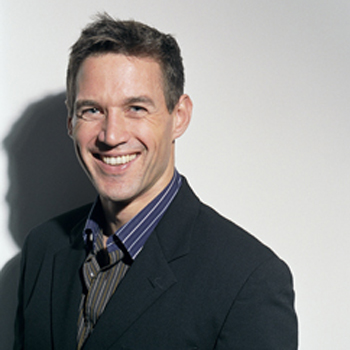 Alistair Appleton is presenter of  BBC2's Escape to the Country. This much-loved show regularly pulls in ratings of 2 million viewers.  He is also hard at work as a teacher of Mindfullness - a form of Buddhist meditation and is training to become a clinically-accredited psychotherapist.

Alistair's TV career includes Escape to the Country, Cash in the Attic and House Doctor. All of these shows ran for 10+ series with Alistair at the helm.

He began his presenting career in Berlin in the 1990s with a live, internationally broadcast current affairs show which threw him into the presenting deep-end: no auto-cue, simultaneous translations into German, self-penned scripts on a dizzying array of subjects. His two year stint in the news room of Deutsche Welle also gave him a strong journalistic training in saying things accurately but using few words!

Once he returned to the UK, his experience landed him the presenter job on Five's hit property show House Doctor alongside Anne Maurice. He then presented BBC Breakfast live from Bath, the Tate Modern and the BBC Proms. He travelled widely hosting BBC Holiday and showcasing beautiful beachside properties in UKTV Home's Fantasy Homes by the Sea, as well as shopping for homes and bargains in Uncharted Territory and Foreign Exchange, both for the BBC.

Alongside the many series that Alistair has fronted he's also pursued his great love of classical music, hosting three seasons of the BBC Proms for BBC4 and presenting the Radio 3 weekend breakfast show. He is also the permanent host of the format-breaking Nightshift, a popular late night concert series by the Orchestra of the Age of Enlightenment which brings baroque music to the Roundhouse and underground Shoreditch venues.

It is his training as a Buddhist meditator which brings another important part of Alistair's life into focus. SInce 2004, he has been a great proponent and teacher of Mindfulness - a form of Buddhist mediation which has had proven success in reducing stress and mental suffering.
Despite these many interests, Alistair's also turned his hand to acting and performance - most notably his cameos in Doctor Who and ITV's Footballers Wives. And more recently he has collaborated with the composer Jeremy Thurlow in a piece commissioned by the Spitalfields Music Festival.
In 2020, Alistair launched the Mindsprings School which allows people to study yoga with him from your own home and at your own pace. There are two powerful courses to help you work with anxiety using meditation also and another looking at the therapeutic tool of ‘tapping’ and how that helps us meditate more deeply.
A thoughtful and inspiring teacher for these trying times.
Read More