Alex Mendham and His Orchestra 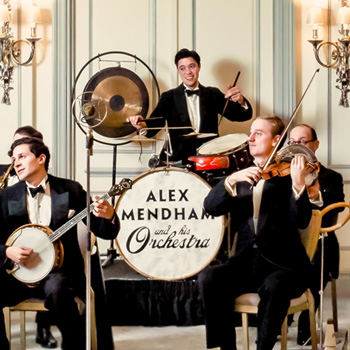 Formed under the youthful direction of Alex Mendham, this 11-piece orchestra authentically performs period dance band music from the Art Deco era but with a modern energy that only comes from younger musicians.

Essex-born musician, singer, and lyricist Alex Mendham made a name for himself, having formed his own orchestra at the tender age of just 20 (and refusing to slow down ever since!). He spent his youth studying the saxophone and meeting the last surviving dance band musicians from the golden era including the virtuoso Al Gallodoro, a star of 1920s Paul Whiteman fame. He also spent several years as protégé to Bob Wilber, himself a student of Sidney Bechet.

Alex decided to create and authentic vocalist and frontman after forming his Orchestra – himself! He exchanged the saxophone for a conductor's baton and the rest as they say - is history.

Alex and his Orchestra have turned the music of a golden age into a worldwide concert touring show which sweeps away with the high style and musical glory of the 20’s and 30’s.

Initially, Alex Mendham pitched his wild idea to the owners of London's Savoy Hotel, and the Orchestra embarked a long-standing residency in the hotel's hallowed ballroom. Request performances soon followed at many iconic venues around the capital, including the world-famous Ritz Hotel. . This vital early period allowed the Orchestra to hone its signature style and sound, playing together each night.

Soon Alex and His Orchestra decided to perform Worldwide - beginning with the now legendary sell-out show at the Kursaal Concert Hall in Belgium,. They now perform internationally performing everywhere from the lush art-deco Cicada Club of Downtown L.A to open-air concerts in the gothic palaces of Russia, via grand scale events upon the romantic canals of Venice.

Outside of their live performances, the Orchestra is a mainstay of BBC Radio, and has lent it's talents to productions for film and television. A highly popular corporate choice.