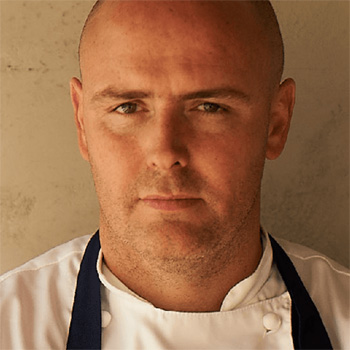 Liverpool-born Aiden Byrne is the head chef/owner of The Church Green in Lymm, Cheshire.
In 2002, he earned a Michelin star for his cooking in The Commons Restaurant in Dublin, Ireland. He has worked under the leadership of Paul Rankin at Roscoff Restaurant, at Peacock Alley under Conrad Gallagher and in 2006 was head chef of the Grill Room at London's Dorchester Hotel.  At the age of 22, at Adlards in Norwich, Aiden was the youngest chef to win a Michelin Star.
As his career progressed he worked at Michelin-starred establishments including Danesfield House and Spa, near Marlow, Buckinghamshire, where he was Executive Chef of the Oak Room and The Orangery Restaurants. He also spent two years as Head Chef of Tom Aikens restaurant.
Aiden's  TV appearances include BBC's Saturday Kitchen, MasterChef and Food Poker, and UKTV's Market Kitchen. He has represented the North West in BBC1's Great British Menu and has appeared on BBC1's The Money Programme in The Rise of the Superchef.  He has also taken part in 'The Great British Menu' and was the victor for the North West.
Read More