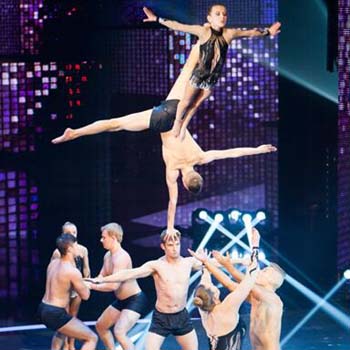 Acropolis is an acrobatic gymnastic team from Deerness Gymnastics Academy in County Durham. Medal winners in their sport, both at national and international level for the Great Britain Acrobatic Gymnastics Team, the group includes the current British, European and World Champions.
With a variety of acrobatic skills, their performance demonstrates strength and power mixed with artistry, style and creative flair.
Acrobatic gymnastics, with its infusion of choreography and complex acrobatic skills, is a unique entertainment and a delight for spectators. Requiring strength, agility, flexibility and balance, the results are spectacular. Acropolis's displays can include between four and eleven gymnasts.
These acrobatic gymnasts have been training together for over 10 years but they formed 'Acropolis' more recently in order to participate in, and win, ITV1's show 'Let's Get Gold' in July 2012, hosted by Vernon Kay. They wowed the panel of celebrity judges, including Rio Ferdinand, Freddie Flintoff, Martine McCutcheon and Una Healy in front of an audience of millions.
Rio Ferdinand said: Fantastic", Pure style and grace", true talent" while Freddie Flintoff enthused: The start of something massive", Properly entertaining", Power, precision and entertainment" and Martine McCutcheon thought they were The most fantastic thing", I would pay to see that as a live show".
The group is managed by Stuart Thompson, a former international gymnast, who is also an acrobatic gymnastics coach with the Great Britain National Team and head of acrobatics at Deerness Gymnastics Academy.
Read More