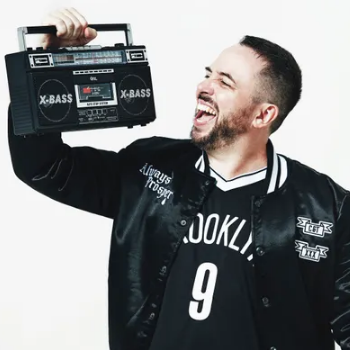 An Irish would-be hip-hopper with a difference maximise audience participation with his 'what's in your pocket?' rap routine.  Members of the audience are asked to produce items from pockets and handbags to provide Abandoman with the inspiration for his one-off compositions.

Abandoman has previously won Hackney Empire New Act of the Year, Best Comedy Newcomer at the Adelaide Fringe, headlined comedy stages at Glastonbury, Latitude, Reading and Leeds, performed in the house band for Alan Carr's Happy Hour on Channel 4 alongside Craig David, played the part of Dictionary Corner in 8 Out of 10 Cats Does Countdown, as well as supported and toured with pop behemoth Ed Sheeran.

"Wow - Abandoman were the best awards dinner entertainment I've ever seen. Not only were they engaging, interactive, on message and funny, but they were also really nice guys! I would absolutely recommend them to anyone and would happily book them for other clients. Thanks guys - you made me look good!" Off License News Awards

"Astonishing and hilarious to watch"  Metro

"A star of the future!" Time Out