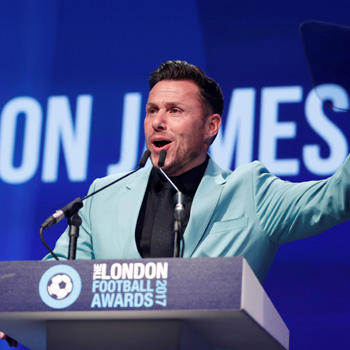 Aaron James is one of the top mainstream comedians in the U.K today. He has many strings to his bow also being an impressionist, host, auctioneer and presenter with an ability to work any type of event and make it fun-filled.

Providing pre-match entertainment at Manchester United, Chelsea, Leicester city and many more aswell as numerous champions league finals all over the world, and World Cup finals.

Entertaining at Twickenham for six nations and autumn internationals.

Television appearances on Friday Night with Jonathan Ross, C4 Big Breakfast, Only Fools & Horses and on radio shows on Radio 2, Talksport and 5 live.

Voice overs for over 40 birthday cards, adverts, and corporate events.

Auctioneer at the London Football Awards, The Bobby Moore Celebrity Sports Quiz and recently for the SAS!