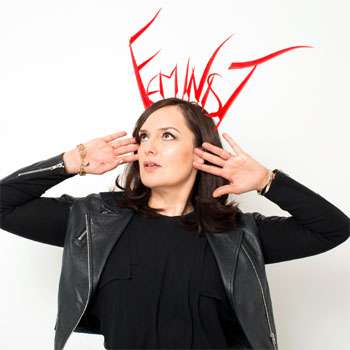 Deborah Frances-White is an award-winning comedian, podcaster, screenwriter, public speaker and activist. She is best known for her hugely successful podcast “THE GUILTY FEMINIST “which has had almost 40 million downloads in two and a half years. The podcast is renowned for dissecting modern feminism in an amusing and insightful way.

Deborah is also creator and host of the comedy panel podcast “Global Pillage” as well as the co-creator and executive producer of BBC Radio 4's “Grownupland”. Her comedy series “Deborah Frances-White Rolls The Dice” has now run for two series on BBC Radio 4 and also won a Writer's Guild Award for Best Radio Comedy in 2016.

As a writer Deborah’s Deborah's new book “The Guilty Feminist” will be released in September and Deborah will then be embarking on a national book tour.

Deborah also works with “Help Refugees” on live events in Calais. She also works in theatre and is developing with the composers a hip-hop musical called “Suffrageddon” which The Sunday Times described as "Britain's answer to musical sensation Hamilton". The developing work has already been performed at The London Palladium, The Roundhouse and Latitude Festival to full houses and standing ovations.

Deborah’s background as an improviser, her quick wit and her warm and friendly style combined with her passion for justice, fairness and inclusion make her a formidable comedian. Her hour-long shows “Cult Following” and “Half a Can of Worms” were turned into a BBC Radio 4 comedy series for which she won the Writers’ Guild Award.

A great choice for corporate events