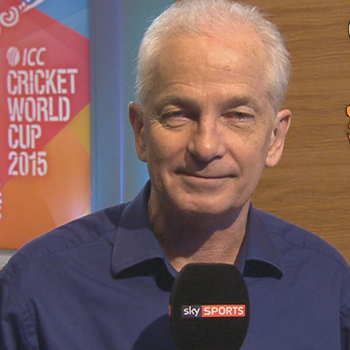 David Gower became vice-captain of England in 1982 and, at the age of 25, led his country in the Test against Pakistan at Lord's, when Willis, the official captain for the series, was injured.  On the 1982/3 tour of Australia, he was England's outstanding player.  He scored 441 runs in the five Tests with 114 at Adelaide and three fifties.  Runs continued to flow against New Zealand in 1983, including two more centuries.  When Bob Willis was forced to return home from Pakistan,  David once more took on the England captaincy.  He had a difficult task - the side had just lost the series in New Zealand and the first Test against Pakistan, but he responded heroically, scoring 152 at Faisalabad and 173 not out at Lahore, almost retrieving the series.

He was appointed captain for the 1984 series against the West Indies but it was a disappointing series for him and England were thrashed 5-0.  His team recovered in India in 1984/5 and David made a timely return to form in the last Test with a defiant 78 to ensure England's series win.  In 1985, he made 732 runs in the Tests, a new record total for a home series against Australia and the highest aggregate ever scored by an England captain.  His three Test centuries were highlights of the series as England regained The Ashes.

David Gower lost the England captaincy in 1986 when he also resigned as captain of Leicestershire.

In July 2009, he was inducted into the ICC Cricket Hall of Fame.

Since ending his playing days, David has become a media star through his work as a cricket commentator for the BBC and, latterly, with Sky Sports. He also made frequent appearances on the BBC sports panel game 'They Think It's All Over'.
Read More